Finally, #smoaknlance enthusiasts: your ‘ship has come in.

Several months ago the more social media-minded fans of the “Arrow-verse” found themselves getting behind a full-blown, hashtag-driven movement when one of “Arrow’s” series regulars, Paul Blackthorne, suggested that his long-suffering character, Starling City cop Quentin Lance, could use a little relief from the steady flow of tragedy in his life, in the form of a romance with Donna Smoak, the age-appropriate but also dead-sexy mother of Team Arrow’s tech darling Felicity (Emily Bett Rickards), as played by the vivacious Charlotte Ross. And even though the two characters had yet to meet on screen, the Twitter landscape was quickly ablaze with enthusiasm for the hookup.

Now, after a long online flirtation between the actors and even more dark plotlines for Lance, Ross is back in Donna’s sky-high-heeled shoes for tonight’s new episode, “Lost Souls.” And as she revealed in conversation with CBR News, sometimes the rumors you read on the Internet actually are on target. 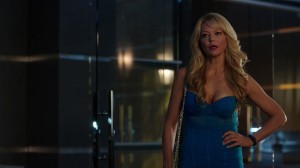 How much advance notice do you get from the team over at “Arrow” before you know, “Oh — I’m going to be on again?”

Sometimes they call like four weeks prior, and they do what they call, put a pin in it. Meaning, let us know if you have any conflicts if you’re doing another movie or another series or something. Then they confirm it a couple weeks prior. So I’ve been happy to say they’ve called and put a few pins in it this season. Yeah, I’ve been happy.

We’ve been waiting for a little romance to come into her life since we got some teases earlier this year. The fans have been having a lot of fun with you and another member of the cast — Paul Blackthorne — playing the anticipation game on social media. What can you say about what’s about to happen for Mama Smoak?

Well, I can say that it’s very clear that the showrunners and everybody do listen to what the fans say, because we did this simple selfie, as you know Paul and I did last season, and that kind of started this hashtag – #smoaknlance. I was just so touched by that. I thought it was so sweet. Then I thought, gosh we haven’t even met on the show yet, and the fans have a shift off in their own relationship. I thought, “This is amazing!”

Then, I had dinner with [“Arrow” Executive Producer] Andrew Kreisberg about four or five months ago and I said, “Is this going to happen? Is this going to happen?” He’s like, “I can tell you it’s going to happen.” I was like, “Oh this is so great.” So then, Paul was talking at a few comic cons and he started this #getlancelaid, which was frickin’ hilarious. I think the fans have seen him go through a lot, obviously, on the show. I think that they would love to see him have a little happiness and a little love in his life. I’ve been so grateful and humbled by the fan support that, I think, it’s the fans that kind of thought this whole thing up. So I can say with a lot of happiness that we finally do meet in [tonight’s] episode.

What else is going on with Donna as we re-meet her?

Well, I can tell you that it was Oliver [Stephen Amell] that calls her to come in town for tomorrow night’s episode. He called her and they had some conversations, and he said some things, and he is the reason why she showed up in Star City. So that’s good. So she obviously has built a relationship with Oliver.

I think that at first, Felicity and Donna were a bit estranged and it was a bit heated, and there were a lot of conversations that needed to be had with some hurt feelings. Now, they’re kind of growing into, “Okay, I get that we’re different, we dress differently, maybe I get mani-pedis and you don’t,” all these different value systems, maybe.

But in general, they love each other and really support each other and there’s a natural comfortability between the two of them. So they’ve been finding themselves wanting to spend more time together. So I think it’s kind of grown organically, their relationship, into really supportive friendship in many ways, as well. I think all of that has made Donna want to be around her daughter more, and her daughter want to be around her mom more.

How has the relationship between Donna and Oliver evolved since he opted for domesticity with Felicity? 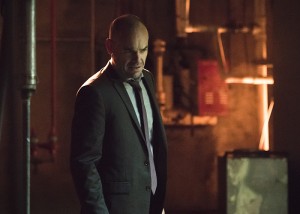 Spurred by a campaign on social media, Paul Blackthorne’s Quentin Lance and Ross’ Donna will soon strike up a romance

Well, I think that you know from last season that Donna was really wanting her daughter to find a boyfriend. That was like a high priority for her. She also really just deeply wants her daughter to be happy and find a partner. So she’s really thrilled because she’s starting to see how much her daughter really feels for Oliver, and that is something that she’s never seen her daughter feel before. So that makes Donna really happy. So as the fans would say, Donna is their number one ‘shipper.

We’ve gotten a few hints that we might see Donna’s ex show up this season. Have they given you any heads-up as to what you might expect?

No, not a lot. I know the producers have said that they’ve been talking about it and I know the fans are really interested in seeing it. I know that I’ve said a bit about the fact that obviously he left us, and I raised her as a single mom, and he didn’t treat me well. And to the extent of how bad and how mean he was, we’re not sure, but obviously, he wasn’t supportive and he wasn’t caring toward us, and maybe even mean.

How far does Donna’s wardrobe go this time around? Are the heels any higher? Are the skirts any shorter?

Well, let me ask you this. How can the skirts get any shorter, and how can the heels get any higher? That’s the question. Let me tell you what’s challenging. Trying to put a mic on Donna. A mic, as you know, is a little square pack — it’s either hidden sometimes in the waist, or in the ankle — and I’m wearing skin-tight, mini-miniskirt, low-cut. They talked to me and I said, “Where are we going to put this mic?” It’s the most challenging thing with her character.

When her ex husband comes around, she doesn’t need to show off. She knows what she’s got.

You’ve certainly been involved in projects that have had devoted fan followings, but in just a handful of appearances, both the character and you as the actress behind her, have been so embraced by the “Arrow” fan community. What has that meant to you at this stage of your career?

I mean, honestly, it’s one of my favorite questions that you’re asking right now, because I have been doing this career for almost 30 years, to be honest with you. For most of my career, gauging popularity, whether the fans liked or hated you, was really from snail mail. It’s the mail that would come to the studio, and they would count that mail and look at the mail and see. Sometimes storylines would be dependent on all your fan mail.

Then, as the years progressed, I was on the younger demographic show called “Glee,” and I started to see what social media was, and it was just so eye-opening and amazing. Then, I started to get involved with it. But this show takes it to the Nth degree. I just am so in awe and grateful and humbled by the response the fans have given me, what they say vocally. I try to wonder why do they care about my role so much? Why are they so loving and supportive? Because I don’t take it lightly. I mean, I really appreciate it. It means so much to me. 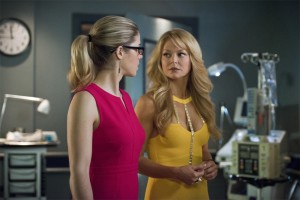 I think it’s a perfect storm. I think it’s a few things I would guess. I don’t know, to be honest with you. But one of them I think is because Emily [Bett Rickards] is so wonderful. People love Felicity so much. I think that they wanted to know for a long time, who was her support system? Where did she come from? So I think they were really excited to finally see her mom. Then her mom, although she might be a bit over the top, I try to play her as real as possible. And the fact that she’s had a lot of hard knocks, a lot of unfortunate things happen, and she’s picked herself up by her bootstraps and has really tried to put a smile on her face, and keep going and survive with persistence. I think everybody understands that life is hard, and we all have bad luck sometimes, and we have to keep going. So I think that that’s one side of maybe what they relate to.

Also, the fact that not everybody gets to pick who their parent is. So sometimes, a parent might be very different from you, but you still see a lot of beautiful things in them and choose to have a relationship with them, even though they’re very different. I know I relate to that, because as I got older, my parents were kind of different than me in what they wanted to do and their value system. But I found a lot of beautiful things with them and things we could connect with. I think that the differences are also one of the best things about my relationship with Felicity.

So I think it might be the whole package. I don’t know, but I can tell you that I respond to the fans a lot, and I engage with them a lot, and I’m just unbelievably grateful for it. I really am.

Your big break came with “Days of Our Lives,” which is celebrating its 50th anniversary this year. How did that show really changed things for you?

Well, it did change everything for me. I mean, I jokingly call it my “college,” because I got on a week after high school, and I was on for four years. Then I left. You shoot all year ’round. You don’t have a hiatus, except maybe one day for Christmas. They really were my family. Charles Shaughnessy was very much a father figure. The training it gave me was something that stays with me today. I mean, I did 40 pages of dialogue a day. Sometimes I don’t even know how I did that in hindsight. It was wonderful training and great training for good work ethic.

I’m forever grateful for my experience back on “Days of Our Lives,” and I still care a lot about the cast that I worked with and I follow their careers and their families and everything. There’s only a few soaps left on the air. So they really deserve a lot of praise for being on the air for so many years and still doing so well. And they are one of the best places to work as an actor, particular a young actor coming up through the ranks, because it’s just like taking acting class every day. So it was one of the biggest breaks at the time I’d ever had, and I’m still so grateful to this day for them.