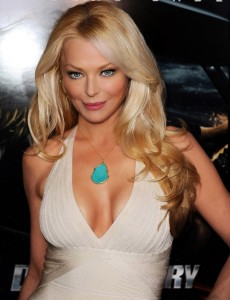 Born and raised in Winnetka, Illinois to Princeton and Harvard grads, it was expected that Charlotte Ross would follow in her parents’ footsteps and continue in the field of education. However, falling in love with acting (and singing) in the tender years of her childhood, Charlotte had other plans in mind and decided at an early age she would follow the “Hollywood” route instead.

From that moment on, Charlotte studied with anyone and everyone she possibly could to polish and sharpen her craft (she especially adored, Roy London). She worked at Second City and the Goodman Theater in Chicago and earned an early living with numerous commercial and modeling gigs. Then, a month after graduating from the famous New Trier High School, Charlotte made the move to Los Angeles where she quickly landed her first role in Hollywood as ‘Eve Donovan’ on NBC’s Days of Our Lives, a role that later garnered her two Emmy Nominations. After a wonderful four years on the infamous soap, she went on to pursue other roles. Charlotte then quickly jumped into starring in numerous TV movies including, Kiss So Deadly (NBC), Kidnapped in Paradise (Universal Television), Fall into Darkness (NBC), and She Says She’s Innocent (NBC), to name a few. She also landed the lead in Aaron Spelling’s, The Heights (FOX), which earned a Gold record for her and the cast’s singing. She went on to release three additional albums.

Since then Charlotte has remained a prominent figure in the entertainment industry, starring in TV series such as CBS’s highly acclaimed comedy The Five Mrs. Buchanans by Marc Cherry for one full season, FOX’s Pauly with Pauly Shore, NBC’s John Wells’ ER and later his family drama, Trinity for a full season. She also starred in Showtime’s critically acclaimed Beggars and Choosers as ‘Lorri Valpone’, a role the Los Angeles Times said made Charlotte an “Emmy shoe-in”.

Before Beggars and Choosers was officially canceled after two seasons, Charlotte was asked to consider replacing Kim Delany on the Emmy Award winning show, NYPD Blue (ABC). Charlotte gratefully jumped at the opportunity and made her debut on the ever successful cop drama as the tough talking Irish Detective, ‘Connie McDowell’. Again, the media’s response to Charlotte echoed that of Beggars and Choosers with the LA Times saying, “If NYPD Blue still had the popularity it once had, Charlotte would have a shelf of Emmy’s”… not to mention her famous “ass scene” that caused a succession of court appeals about standards and practices ending in the Supreme Court with President Obama weighing in.

At the end of her fifth season as ‘Detective Connie McDowell’ on NYPD Blue, Charlotte was eight months pregnant with her first child and eager to take a break from acting to just be a mom. After so many years of being so grateful for work, she craved a break and today still says that time off was the best decision she ever made.

While recently (2014) guest starring as Deacon’s ex-girlfriend on ABC’s Nashville, Charlotte is currently playing the role of Felicity’s mom on the CW’s hit show, Arrow, as the beloved Donna (aka “Mama Smoak”).Charlotte continues to re-invent herself for a diverse array of roles. Whether it be showing off her athleticism as the first female umpire in professional baseball in the upcoming and highly anticipated short film, The Umpire, seducing Nicolas Cage as the white trash, tattoo covered sex cougar, ‘Candy’ in Summit’s 3D film, Drive Angry (February 2012), or starring in Street Kings: Motor City (April 2013) opposite Ray Liotta, Charlotte continues to captivate audiences and impress critics with her unbelievable range as an actress.

A successful actress for over two decades, a proud single mom to her now ten year old son, Max, a passionate recognized animal rights activist (widely known for PETA “I’d rather go naked…” campaign) who received the HSUS Animal Advocate of the Year Award for her lobbying work on Capitol Hill to release chimpanzees from testing labs, a vocal fitness fanatic (recently summited Kilimanjaro) who inspires women to be in the best shape of their lives and, is currently, filming her own fitness video, Charlotte is fortunate to be able to do what she loves. She is passionate about producing as well, and currently has three TV shows in development. Once a Winnetka gal with a love of finding the truth on screen, Charlotte is now living her dream and couldn’t be in a happier more grateful place in her life.

Currently Charlotte can be seen as a series lead in the CW TV series Arrow portraying Donna Smoak, mother of Felicity.

Charlotte very much enjoys her roll as Felicity’s mother and is relishing the growing and changing relationship between the characters Donna and Felicity. “I LOVE, the dichotomy between the MIT grad, Felicity, and the Vegas cocktail waitress, Donna. I think it adds one of my favorite dimensions to their relationship and, in an odd way, even makes it stronger,” said Charlotte in a recent interview with Entertainment Monthly.

The show Arrow is based on DC Comics character Green Arrow. The popular show has been on since 2012, with Charlotte joining the cast in 2014 for Season 3 and again for Season 4.

Charlotte guest starred on the show Nashville (ABC) in which she found a unique bond with fellow character, Deacon, as they both are survivors of a troubled past. She portrayed Ruth Bennet, a sober alcoholic who used to work as a backup singer on Rayna’s tours.

In VH1’s Hit the Floor, Charlotte played series lead Olivia, the head coach of the a dance team for the fictitious Los Angeles pro basketball team, The Devils. Her character was a no nonsense former Devil Girl herself who expects nothing but the best from her girls. Charlotte loved playing the character of Olivia and said, “She’s a fun, juicy character to play. That’s what I look for. If I don’t feel passionate about the character, it’s like death,” in an interview with New York Daily News.

In Fox’s hit TV series Glee, Charlotte played the recurring role of Judy Fabray, the uptight mother of Quinn Fabray from 2009 through 2012.

Charlotte played the character Annie on ABC’s Jake in Progress as John Stamos’ (Jake) fiancé.  Jake was a hotshot advertising executive who, after years of not committing, was looking for the perfect girl to settle down with.

Between 2001 and 2004 Charlotte was a regular series lead on ABC’s hit TV series NYPD Blue. Her character, Detective Connie McDowell, eventually ended up having an on screen romance with lead character Dennis Franz who played Detective Andy Sipowicz.

From 1999 to 2001 Charlotte played a major starring roll for two full seasons on Showtime’s Beggars and Choosers as Lori Vulpone, a harried executive who tried to keep a fledgling TV network afloat. The show was known for its satire and weekly skewering of celebrities. The term “beggar” meant someone who was trying to sell an idea to the TV network and “choosers” referred to the executives who had the decision making power for the ideas they were pitched.  Charlotte earned an Emmy nomination for her work on this show.

Charlotte played the good sister, Fiona, for a full season in the family drama TV series Trinity (NBC).  Fiona was a high achieving bond trader attracted to all the wrong men.

On Fox’s Pauly, Pauly Sherman is the slacker son of wealthy businessman, Edward Sherman. Charlotte plays the much younger woman, Dawn Delaney, that Edward marries. They move in with Pauly, who makes it his mission to ruin their relationship.

In 1994 and 1995 Charlotte had a regular role as a series lead on the CBS TV series, The 5 Mrs. Buchanans as Bree Buchanan, the bouncy and overly enthusiastic wife of Jesse Buchanan. The Five Mrs. Buchanans was the story of four sisters-in-law who had nothing in common except for the dislike of their loathsome, gravel-voiced mother-in-law.

In 1992 Charlotte starred as a series lead in the Fox series The Heights in which the single “How Do You Talk to an Angel” reached No. 1 on the “Billboard Hot 100” in November of the same year.  The Heights was a band of middle class kids hoping to make it big in the music industry.  Charlotte and the other cast members earned a gold record.  Additionally, in 1993, the song was nominated for an Emmy Award for “Outstanding Individual Achievement in Music and Lyrics”.

Days of Our Lives

Fresh out of high school, Charlotte landed the roll of Eve Donovan on Days of Our Lives(NBC), one of the longest running soap operas. She considers that this is where her training and education as an actor began in earnest. Charlotte had this role from 1987 through 1991.

Charlotte has appeared in numerous films including Touch and Go, Foreign Student, Love and a .45, Savage Land, Looking for Lola, Moola, Live!, Drive Angry, Street Kings: Motor City, The Umpire and Rita Mahtoubian Is Not A Terrorist. Charlotte has appeared along with movie greats such as Nicolas Cage, Ray Liotta and Daniel Baldwin, to just name a few.

Charlotte is very involved in both humanitarian and animal rights causes. In fact, in 2012 Charlotte was awarded the Animal Advocate of the Year by the Humane Society of the United States for promoting Great Ape Protection and Cost Savings Act.
She also works closely with several animal shelters and has fostered several dogs until they were ready for their own forever homes.
Charlotte’s own dogs are rescues and she is strong advocate for animal rescue groups.

Fitness is Charlotte’s key to looking great and feeling good. Charlotte plans on releasing a fitness video geared towards helping women achieve their own fitness goals.

Charlotte is a single mom to Max, and he is the love of her life. She says that being a mom is the most challenging role she has ever had and “I feel beyond blessed everyday when I see him. I truly am a blessed woman to have my son in my life and I will continue to strive to never take that for granted because, believe me, I don’t.”