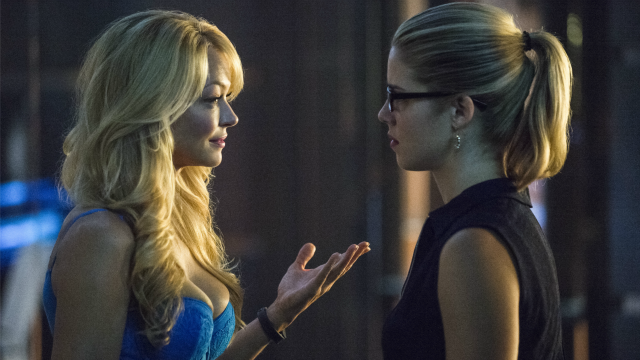 Tonight’s episode of Arrow is apparently a big one for the Smoak family.

There seems to be some trouble in paradise with her current boyfriend, Oliver Queen, while her former boyfriend, Ray Palmer, is both alive and missing. Meanwhile, her mother — with whom she has a somewhat complicated relationship — is back in town, apparently at Oliver’s request.

Charlotte Ross plays Donna Smoak, and has further revealed that tonight will see Donna meet Quentin Lance for the first time — and that’s a relationship which, as the fans have demanded on social media, will be explored as the season progresses.

Ross joined ComicBook.com to discuss tonight’s issue, her thoughts on the current state of Olicity, and the long-term prospects of her character’s relationship with Quentin Lance.

Your character has had a relationship with Oliver off-camera; can you elaborate on that? How might that impact the decision to come see them at this moment?

Yeah. I can tell you that it was Oliver and I talking on the phone while I was in Vegas, that he asked me to come to Star City for [tonight’s] episode.

Do you think Donna knows he plans to propose to Felicity?

I mean, I can’t say that factually but last year she was just excited in pushing her daughter just to have a boyfriend. I think Donna has been wanting to see her daughter happy and in love for a long time, even down to helping her get a new wardrobe just to find the right man. I think one of the reasons she cares for Oliver so much is that Donna sees how much vulnerable and deeply Felicity cares for Oliver. I think that touches Donna in a really deep way, so as the fans would say, I think Donna is their ultimate shipper. She really is happy and really is excited about it.

Early on, Donna was one of the first people to comment on the Oliver/Felicity relationship. Do you have any more insight to bring to bear this time around?

Well, I think when you do fall for somebody, it can be a scary thing and it an feel like you’re falling off a cliff and it can be something where maybe you don’t really want to do sometimes because you’re scared of what will happen if it doesn’t work out. even though Donna has had a lot of pain and heartbreak in her life, I think Donna is a person who feels like you have to jump off that cliff to ever know what it feels like to fly. It’s very scary and risky, but better to take that risk than to always be sitting on the ground and playing it safe. As their relationship has evolved, I think that Donna can draw from her own experience and have some advice on how to proceed as things do get more serious.

Are you excited to be doing a little bit more with your own stories this season, as opposed to just playing off Emily and Stephen in every scene?

Well, I’m not thinking “I want my own subplot,” per se. I’m just thinking that Donna is so wanting Felicity to be in love and have a happy, healthy relationship, but Donna’s pretty lonely! I am kind of excited for the character to have her meet somebody who sounds like he’s been lonely for a long time, too. And, you know, Lance has been having a rough go for a while. He’s quite lonely and you know, and has jokingly said at some event, “Hashtag Get Lance laid,” so I think he’s kind of eager to have a relationship as well.

I adore Paul as a person and as an actor, so we’re really thrilled that the writers have decided to have us finally meet in [tonight’s] episode. We’re really excited about it.

It feels like the writers here have been really responsive to the fans. Is it interesting to watch that process play out?

Yeah, I think it’s one of the best things about TV, is you kind of see and feel what’s working and what’s not and write for it. I highly doubt that they thought they would be putting Donna and Lance together when I first came on the show. I think things grow organically and I think the fans are a huge part of that. Paul and I did a selfie in the trailer last season and they started the hashtag “#SmoaknLance,” and they have us shipped and together and we haven’t even met on the show yet!

So I had dinner with Andrew Kreisberg a couple of months ago and I said, “Is this going to happen? I’d love to work with Paul, and the fans…” and he said, “I can tell you it’s going to happen.”

I was so excited. I didn’t know when it was going to happen, but yeah, they absolutely see and hear everything the fans are saying and whether it gives them ideas, or direction, or just something to think about, it definitely is heard and matters and I think it might be a culmination of everything.

And then there’s the chemistry. I didn’t know that Emily and I would have such an innate, natural chemistry when I first came on the show and I think that’s one of those natural blessings that can happen and one of the reasons why the fans, maybe, have taken to Donna so much is becuase they really see and feel that, and I hope they feel the same with Lance and I.

Up until now, you’ve had a lot of humor, mixed with some serious moments that are family-driven. Do you think Donna has secrets in her past, though?

Right. Well, I think that we’re all really excited for that. Obviously you’ve seen Donna say a few things. We know that he left me and Felicity, so I had to raise her on my own and it was not easy at all. And it sounds like he was very hurtful and lied and really screwed me over so we know that he was not nice. To what degree of how bad he is, we do not know, but I know it’s something the writers and producers have been talking about for a while. I know it’s something the fans have been really wanting to see and I know that Emily and I are really excited and eager to meet the man who’s going to be playing this character. We can’t wait!

via Arrow’s Charlotte Ross on Olicity, SmoakNLance and More