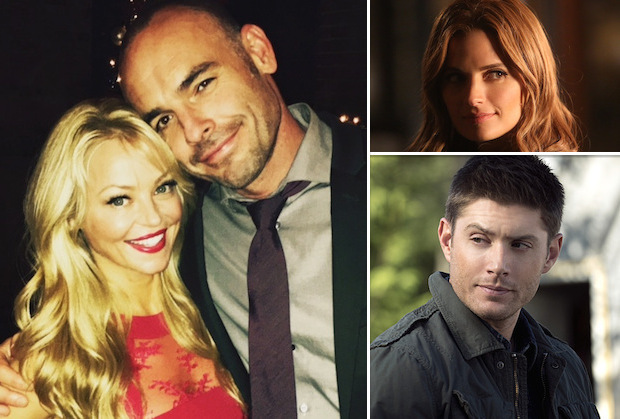 Will Arrow finally deal with daddy issues? Who’s new on Castle? Does The Darkness dictate aSupernatural demise? How will Beauty and the Beast bid us adieu? Read on for answers to those questions plus teases from other shows.

RELATEDNovember Sweeps Preview: Scoop on Castle, Once, Scandal and More

With Charlotte Ross returning to Arrow soon, can you tell us anything about her relationship with Oliver, Felicity, and if she’ll finally meet Quentin Lance? –Tina
Stephen Amell shared at the set last week that Oliver has formed a bond with Mama Smoak, especially since he was living the suburban life with her daughter Felicity. “I had always imagined that Oliver in his nice, easy-going state would have a dialogue with Donna Smoak, which was proven correct and leads to some funny moments,” he said. “The dynamic between the two of them is excellent.” As for any possible meeting of Donna and Quentin, Paul Blackthorne joked as he came away from filming the fall finale, “Do I have lipstick on my cheek? [Then again] it’s a Christmas episode, so of course, everybody’s kissing everybody.” Hmmm.

When will Arrow fans learn about Felicity’s father? –Kyle
Not anytime especially soon, it sounds like. “I don’t know anything about my dad,” Emily Bett Rickards said on set last week, “except that he’s probably going to be a villain and he’s rich and that he comes in this season.”

Do you have any new Castle scoop? –Alie
During our November Sweep preview chat, I was sure to ask the co-showrunners what exactly Kristopher Polaha will be up to on the series, besides being tall. “He’s playing a public defender who comes in [during the fall finale ‘Mr. & Mrs. Castle’] and presents with some unexpected complexity,” said Alexi Hawley. “He’s a little bit more than what he seems. “The design of his character,” Terence Paul Winter added, “is that he’s immediately at odds with the folks at the 12th, while representing a murderer. He’s trying to do his job while the 12th is trying to do theirs.”

Do you have any scoop on where Castle‘s Beckett will be when Stana Katic was in Milan? –Laura
For the next new episode, “Cool Boys” (airing Nov. 9), Beckett is “out of town at a meeting for a couple of days, at a work-related function,” Alexi Hawley told me. The EP then made clear that she is off doing “real work, not secret work” related to the LokSat mystery.

RELATED2016 Renewal Scorecard: What’s Coming Back? What’s Getting Cancelled? What’s on the Bubble?

I know iZombie‘s Blaine is possibly evil and maniacal but he is also entertaining and so delicious. What’s next for him and does it include Liv? —Naazneen
Blaine and Liv will soon find themselves working together because “they have a similar foe,” David Anders previews. “Teammates don’t have to be friends; they just have to win the game.” (As for who would develop feelings first in the unlikely scenario that #Bliv becomes a thing, “Blaine would, ’cause Liv’s just cutie. An altruistic cutie,” Anders says with a laugh.) Speaking of unexpected duos, “Ravi and Blaine have some good stuff together,” Anders teases. “There’s a rivalry brewing between Ravi and Blaine.”

Any clues as to whether Once Upon a Time viewers are literally going to “hell” aka the Underworld, and if so, as a whole cast? Or is it possible it comes to Storybrooke? –Karen
Details — on any confirmed trip to Hell or otherwise – are scarce thus far, but this much I can share: For an early Season 5B episode, the ABC series is guest-casting the roles of a “dashing, strapping young man” who is “single-minded in his pursuit of his destiny: to be the greatest hero who ever lived” and a “plucky, 18-year-old female adventurer with a sly sense of humor and a tough, no-nonsense spirit.”

Is it too early for scoop on Beauty and the Beast Season 4? –Anna
Back in August when this email first came in? Yes. But now? Not so early! At the very least, I can report that the Season 4 aka series finale will be titled, fittingly, “Au Revoir.”

It’s very exciting that we’re going to get some members of the Lane family in Supergirl‘s first season, but is there any hope for Lois herself? And if not a guest-starring role or even a cameo, will we at least hear about her life onscreen? –Tatiana
As a matter of fact, not only does Clark Kent get name-checked in Episode 2, but his lady love Lois also is mentioned. (Jenna Dewan-Tatum then of course debuts as li’l sister Lucy aka James’ ex the following week.)

Do you have any scoop on CBS’ Supergirl? –SuperSurfSurf
Episode 11 will introduce the potentially recurring character of Senator Miranda Crane, a dynamic, persuasive and dangerous ideologue who is preparing for a White House run based on an anti-alien platform.

Anything about Oliver and Connor on #HTGAWM!! —Wahiba
I’ve got news about Murder‘s occasionally law-breaking couple, but whether or not it’ll make you happy is a different matter. Remember how Oliver recently wondered aloud why he’s not actually on the Keating law firm’s payroll — considering how frequently he hacks the Philadelphia PD on its behalf? Well, the line wasn’t a coincidence. “Connor is really worried about him,” shares creator Pete Nowalk. “He sees that getting pulled into Annalise’s web can have really dark repercussions, and he’s experiencing those himself, so he wants to protect his Oliver. What happens to Oliver is definitely a big part of our storyline in the next few episodes.”

What does it mean for Supernatural‘s Dean that he and The Darkness are bound? What plans does Amara/Darkness have for him? Can one be killed without hurting the other? –DeMara
One can definitely be injured without affecting the other. “It’s not like a voodoo doll” (or “twinsies,” as Jared Padalecki jokes) “or anything like that,” star Jensen Ackles clarifies. “We will see… what exactly that relationship is” between Dean and The Darkness, Ackles adds. “I don’t think that he knows what to make of it. What it all means and how it’s all going to tie into his destiny and his future and what that means for the brothers, he’s very nervous about. Obviously, those nerves are something that he’s going to be hiding, but we will see it get fleshed out a bit.”

Supernatural‘s Sam and the Reaper — is there more to this story? –JJ
Interestingly, Dean will also be meeting Billie the reaper (played by Lisa Berry), in the fall finale. “To be honest… we have not shot those scenes yet, so I don’t know how intense it’s going to be,” Jensen Ackles said on set last week. “But I’m excited to work with her.”

Do you happen to have any scoop on Agents of S.H.I.E.L.D. that isn’t Secret Warriors related? –Dee
Exec producer Jeffrey Bell affirms that May is “really angry” after her and Hunter’s attack on Ward wound up getting Andrew (seemingly) incinerated. And she’s not only mad at the menfolk. “Look, she was part of that plan, so she’s culpable,” Bell notes. “Knowing May, she’s more angry at herself than anybody else.” Asked if Andrew’s unclear fate will be confirmed sooner, or later, Bell hedged, “We will absolutely address his fate sooner or later!” (BTW, the Secret Warriors detected and donot appreciate your shade!)

I would love to have any spoilers you can give on S.H.I.E.L.D.’s Fitz and Simmons! — Jenna
It sounds like they will keep their mission to somehow rescue Will from the planet on the down low, which of course on this show tends to backfire in spectacular fashion. “Like any kind of secret, it starts with one person knowing something,” says EP Jeffrey Bell, “and then over time there are twist and turns and complications.”

Hawaii Five-0‘s McGarrett has been receiving mysterious phone calls. His gut thinks it’s Catherine. How soon before we find out who is calling and what this is all about? –Leni
Showrunner Peter M. Lenkov tells me the payoff to that mystery will come at some point this season, though he won’t say how soon. “It’s not an ongoing [plot point], but it’s definitely a cloud that’s not going to go away,” he teased. As for those (Steve included!) wondering if it ties into Catherine’s recent, covert exit, Lenkov said, “I like that people are thinking that!”

RELATEDGotham Scoop: Mr. Freeze to Be Played by House of Cards Actor

Where is Gotham‘s Harvey Dent? Isn’t he supposed to be around more this year? –Drew
Dent (played by series regular Nicholas ‘D’Agosto) resurfaces this Monday in “Mommy’s Little Monster,” and from there on will appear “on and off,” says EP John Stephens. “We’re not playing any full Harvey Dent stories right now, but he’s a part of our world, that’s for sure.”

Can you tell me the song used in last week’s Scorpion when they emerged outside in their superhero costumes? – Colleen
That was “Cruel World” by The Surprise Party.

Real questions, real answers. If you need the Inside Line on a favorite show, emailInsideLine@tvline.com!  (With reporting by Vlada Gelman and Michael Slezak)