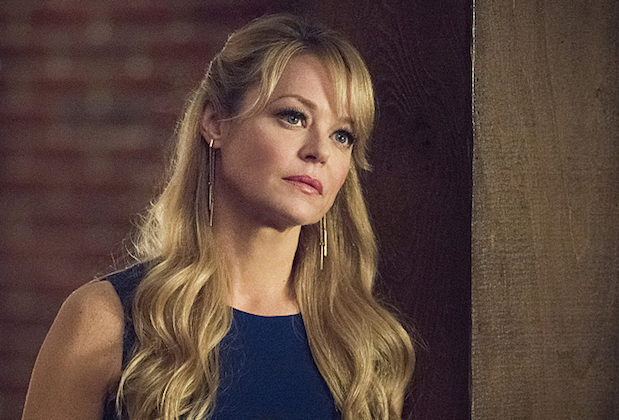 Family ties will be put to the test tonight on Arrow (The CW, 8/7), as Charlotte Ross‘ Donna Smoak shares her first scenes with ex-husband Noah Kuttler aka The Calculator (played by Tom Amandes).

PHOTOSQuotes of the Week From Arrow, Supernatural and More

“Donna has a lot of feelings that she’s been wanting to share with Noah for many years, that have been bottled up,” Ross tells TVLine. And she will get the chance to do so, as Season 4’s penultimate hour unfolds. “Felicity has asked for her father’s help in dealing with a crisis in Star City — she kept it a secret from Donna because she knew how I would feel — and obviously, when Donna finds out that he’s anywhere

near my daughter, a lot of suppressed emotions come spewing out.”

Indeed, while Ross was delighted to finally work with opposite her TV ex (“From the moment Tom was cast, I’ve been looking forward to having scenes with him! He is lovely and we relished working together”), the dynamic between Donna and Noah is probably icy at best. “Donna has said that he left when Felicity was very young, and Donna hard a hard time financially, working three jobs to put food on the table,” Ross reminds. “So while we’ve alluded to the fact that Noah was very bad, to what degree and what he did specifically will be revealed a bit this week.”

And that is not all that will be revealed as mother, father and daughter interact.

“There is something that Donna has kept hidden for many, many years and she decides to, finally, come clean to Felicity about it — even though she knows she may risk losing her by doing so,” Ross previews. “Being a single mother myself, many things Donna feels and the choices she has had to make really resonate with me. And because Em [Emily Bett Rickards] and I have grown so close, it just felt so deep, honest and intimate when we were shooting the scenes in this episode. [Our on- and off-screen bonds] really have become intertwined in a way that has made our work together much richer than I could’ve hoped.”

Turning to the main man

in Donna’s orbit. Ross says that as hinted last week, Quentin Lance (Paul Blackthorne) is being kept from crumbling in the wake of Laurel’s death in part due to his girlfriend’s support.

“Donna is thrilled that Lance decided to be up front and honest and amend his affidavit [about Laurel’s Black Canary persona]” even at risk of losing his badge, she says. “Paul and I have had many discussions about how Donna has potentially become his moral compass, as Laurel was, along with helping him deal with losing her. The question they both have now is: ‘Where do we go from here?’”

As for where Arrow itself is going with next week’s Season 4 finale, Ross uses the words “intense, painful, shocking and scary” to sum up the season ender, adding: “It’s very open-ended for many characters — to such a degree that you will have no idea how Season 5 will resume, and which characters may be returning or which characters will be gone for good.”

Want more scoop on Arrow, or for any other show? Email insideline@tvline.comand your question may be answered via Matt’s Inside Line.