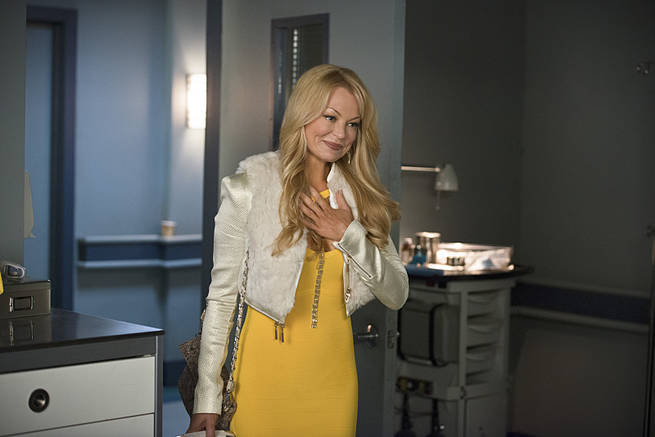 ‘Arrow’ Star Charlotte Ross Chats About the Return of Mama Smoak, Working with Emily Bett Rickards and Her Love for the Arrow Fandom

Charlotte Ross took the Arrow universe by storm last season when she was introduced as Donna Smoak, Felicity Smoak’s (Emily Bett Rickards) mother. Now, she is back on Arrow this season and fans couldn’t be more excited.

Donna Smoak is probably the most beloved new character in the Arrow universe. Donna Smoak turned heads on Arrow last season in the episode “The Secret Origins of Felicity Smoak” and soon became a fan favorite. Charlotte Ross commands the screen as Mama Smoak and continues to add layer and layer to this amazing character. Ross makes her big return to Arrow tonight in the new episode, “Lost Souls.”

Charlotte Ross sat down with Emertainment Monthly to chat about Donna Smoak, her mother-daughter bond with Emily Bett Rickards, working with Stephen Amell, a new love interest for Donna, her absolute love and gratitude for the Arrow fandom and so much more!

Emertainment Monthly: How did you get started with Arrow? Was it a role you sought after or they approached you?

Charlotte Ross: I got started with Arrow when I was asked to audition for a new recurring role to play the Mother of a character in the show but, it was highly confidential who’s Mother it was. David Rapaport [Casting Director for Arrow] sent over a few scenes and I, immediately, loved and felt a connection to the layered role of Donna. The blend of enthusiastic comedy yet rooted in grounded calm survivor strength and yet filled with such raw vulnerability was like a rainbow to play around with and I jumped at the opportunity and auditioned for David and Andrew Kreisberg. We had the best time! We laughed throughout the whole meeting and Andrew said one of my scenes in the audition made him cry! Andrew also told me a funny story of his brother getting an autograph from me when I was filming NYPD Blue on the Fox lot and that he never forgot that. It was cute. I adore David R and Andrew K!

EM: What has been your favorite Donna Smoak scene so far? And who would you love to have a scene with on Arrow in the future?

CR: One of my favorite scenes so far on the show has been the scene Emily [Bett Rickards] and I had in my first episode, The Secret Origins of Felicity Smoak, where we have the first conversation, in many years, that is real, true, painful and vulnerable after not seeing and connecting with each other for years. Emily, of course, was phenomenal, and I think many people could relate to the simple fact that we don’t choose who are parents are like we choose a friend. So many times it’s challenging for us because we want to “get each other” and feel “heard and understood” but, sometimes we have different values and different goals and the understanding of each other, simply, doesn’t come easily. As we grow up, we see our parents as more human- we see what they had to overcome, their faults, etc and you just have to make a choice to try and have a relationship with this person because they are and will forever be your family even though you may be different. So, I LOVE, the dichotomy between the MIT grad, Felicity, and the Vegas cocktail waitress, Donna. I think it adds one of my favorite dimensions to their relationship and, in an odd way, even makes it stronger.

EM: You have become such a fan favorite character on Arrow, were you surprised by the amazing feedback from the fans?

CR: I am constantly blown away at how much love and support the fans have given me. I can’t tell you how grateful I am! The fans are passionate, loyal and very invested in the characters on the show and I feel like they’ve allowed me to become a part of the Arrow family and I don’t take that lightly and respect them immensely. I love this role passionately and work as hard as I can to make her real and truthful and not just some cartoonish caricature which is tricky sometimes as we all know how excited Donna can get! And, I think the writing has been so good and layered that, I think, the fans have taken to Donna in a way that I can’t explain but, I feel they “get her” somehow and that is the most humbling thing to experience as an actor. I’m forever grateful to the fandom of Arrow. It’s been one of the most joyous parts of doing this role, to be honest.

EM: Felicity is such a beloved character on Arrow, were you nervous to take on the role of Mama Smoak initially?

CR: Felicity IS such a beloved character on the show! It’s not surprising to me as Emily is such a gift and beautiful soul and that just, simply, translates through the screen. I wasn’t nervous to take on the role, though. The only thing I was curious about was if Emily and I would have any natural chemistry and how giving or not she would be as an actress. I can tell you that she is not only a giving, supportive and fun actress to work with but, we also have a natural chemistry that we felt from day one and that is rare and something that doesn’t always happen so, I am thrilled. I, truly, love Emily as though she is my real family now. I am thrilled when she is happy, protective and comforting when she is down and am so excited for her future, both, personally and professionally!

EM: One of the great things about the characters of Felicity and Donna Smoak are they are completely original to Arrow, how has it been creating a totally original character on this show?

CR: It’s awesome being a completely original character on the show! It’s like painting on a blank canvass and figuring it out as you go.

EM: What brings Donna Smoak back to Star City this time around?

CR: I’m not sure if I should say what brings Donna to Star City this time around or not without giving anything away but, I will say, that Oliver is a big part of it!

EM: From your Instagram posts, it looks like you will be sharing some scenes with Paul Blackthorne, something fans have been clamoring for, how has it been finally working with him this season?

CR: The fans have a lot to do with Paul [Blackthorne] and I working together! The power of what the fans vocally say really makes a difference! Paul, as you probably already know, is a sweetheart and an extremely talented actor. We would see each other on set and read throughs and we would joke that Lance was “horny and lonely” and “wouldn’t it be an odd, but potentially a beautiful pairing, if Lance and Donna were to meet and maybe have a relationship!”. Last season we took a selfie in the makeup trailer and the fans started a #smoakandlance hashtag that kind of took on a life of it’s own. I don’t know when the writers started to think about really making it a reality but, when we saw a scene where we, finally, meet on the show, Paul and I were ecstatic! The difference between our characters may be the exact thing that attracts us to each other. Yet we still are strong and vulnerable, had to fight thru a lot of bad luck in our lives and, desperately, love our kids and.. are lonely! So, I’m very excited to say that in ep 406 we finally meet! And, we are loving working together. We laugh so much my stomach and cheeks hurt while filming!

EM: Fans are anxiously awaiting Donna’s reaction to Felicity and Oliver’s new relationship, how has it been playing with that storyline and sharing more scenes with Stephen Amell?

CR: I LOVE working with Stephen. He is a very giving actor and, truly, supports the mother/ daughter relationship that Emily and Donna have. He has been welcoming since the first day I arrived on set and goes out of his way to make me feel a part of the Arrow family. I, honestly, adore Stephen and his affection toward his beautiful daughter is touching. He is an awesome Daddy in real life! I think he likes our scenes together as we laugh a lot and, as you know, he has to be very serious most of the time so, it’s always nice to have a bit of levity in a scene for a change, I think. That doesn’t apply to the scene we will be filming this week- it’s a tearjerker!

EM: Before your first episode of the season even airs, you have already been asked back for several episodes, how has it been extending Donna’s role on Arrow?

CR: I’m extremely grateful that they have extended my stay as Donna on Arrow. I , deeply, love this role and miss the cast and crew when I’m away from them. I’ve been in this crazy biz for a while now and it’s not always that way, you know? At this point in my career, it’s not just about getting a “job”, per say. I’m a busy single Mom, I’m launching a fitness venture very soon, I do a lot of philanthropy and, as much as I love acting, I would prefer to only work if I really feel passionate about the role and would enjoy the people I would be working with. To be honest, I pass on projects more often than anything. But, every time Arrow calls, I jump with excitement as they have written a juicy, multi-layered character that is a true joy to play and the cast and crew are a blast. And, of, course, my highlight of it all is how much I adore Emily. I’m grateful for everything about being a part of Arrow and the love from the fans makes me feel like the luckiest girl in the world. In fact, let me just state right now, THANK YOU ARROW FANDOM!! I LOVE you!!

Arrow airs Wednesday at 8/7c on The CW

via ‘Arrow’ Star Charlotte Ross Chats About the Return of Mama Smoak, Working with Emily Bett Rickards and Her Love for the Arrow Fandom