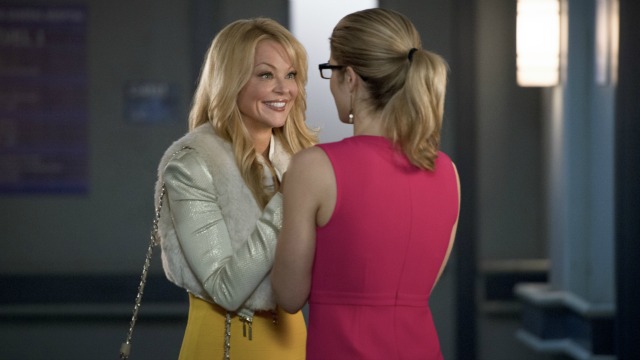 To help get you even more pumped for more Mama Smoak, we called up star Charlotte Ross to get the inside scoop on Felicity’s MIA father, Donna’s upcoming flirtations with Captain Lance, and what she really thinks of that impending Olicity engagement. (Spoiler alert: She’s all for it!)

It’s been so great to watch Felicity and Donna’s relationship evolve from estranged mother and daughter to close friends. What’s their relationship going to be like this season?
Charlotte Ross: I love that you say that because at first I didn’t know how long it had been since they reconnected. Then, throughout last season, they showed that you can’t choose who your parents are, but you can choose who you’re friends are. I think that people can relate. What I love about their relationship is they have kind of realized that even though they’re different, they love each other. It’s a little bit more of a friendship now, I mean obviously it’s still mother and daughter but I think it’s grown in a natural and organic way where they just really love and want to be around each other more.

We recently caught up with Stephen Amell on the Arrow set and he confessed that Oliver and Donna have stayed in touch. What’s their dynamic like in this episode?
CR: Yeah, I saw that and I liked [Stephen’s] answers, they were so cute! I can tell you that in [the new] episode, it’s Oliver who calls up Donna and they have a have a conversation and he asks her to come to Star City.

What would Mama Smoak’s reaction be if she knew that Oliver was planning on proposing to Felicity?
CR: Well, first of all, Mama Smoak has been waiting — as you saw from last season — for a long, long time for Felicity to find a boyfriend. She’s even been a little pushy about it, and even though it’s well-meaning, it’s annoying for poor Felicity to handle her mom hounding her to find a boyfriend. And now, I think that Donna is really, really, really, really excited because she sees that her daughter is vulnerable and really in love. Donna loves her daughter more than anything else in the world and nothing would make her happier than to see her find the love of her life. So, as the fans say, I’m her ultimate shipper.

WATCH: Oliver Has a Sweet Engagement Surprise for Felicity on ‘Arrow’!

I take it that means Donna would give Oliver her blessing if he asked permission to marry Felicity?
CR: I think that the fans could probably guess that Donna would jump at the chance to say yes if he were to ask Donna for her approval.

Be honest: Have you seen that Olicity engagement ring yet? How gorgeous is it?
CR: Well, I can’t say if Donna has seen it or not. Obviously, Donna would have a lot of interest in the cut, the color and the clarity of the ring. [Laughs] I think that if and when she does finally see the ring, it’s probably not going to be a subtle reaction.

Well, we could finally be seeing some romance for Donna too! What can you say about her blooming relationship with Captain Lance this season?
CR: It’s crazy! Paul [Blackthorne] and I did this selfie in the makeup trailer, and then the fans started the hashtag #SmoaknLance. In terms of what the fans have created, you’d think that we were already married and we haven’t even met on the show yet! Paul and I were really thankful and grateful, and I had dinner with [executive producer] Andrew [Kreisberg] about five months ago and I said, “Well, is it going to happen?!” So I’m really excited to say that we finally meet.

Will there be immediate sparks between Donna and Lance?
CR: I can tell you that I adore Paul, and just like with Emily [Bett Rickards], you just have natural chemistry or you don’t. I can certainly say that I feel like I have some natural chemistry with Paul, but I’ll let the fans be the judge of that.

MORE: Our 7 Biggest Theories for Who Will Die on ‘Arrow’

If things do go well with Lance, Donna could be gaining two more daughters with Laurel and Sara. How do you think she’d feel about that?
CR: Obviously, that would be a really fun thing to play out down the line as we move forward. I think what’s so great about TV is I don’t know if all these things were planned at first, or if they see the fans’ reactions to things. They really do listen to what the fans want, and feel strongly about, and push for, so all these things are happening organically. Like you said, getting involved with Lance means getting involved with his family so those things like meeting his daughters will be fun factors to play with.

Speaking of family, Felicity fans are dying to know more details about her MIA father. What are your thoughts on this mysterious man?
CR: I think that we’ve all been interested for a really long time to find out who this man is. Obviously, I’ve said a few things about him that he deserted me and Felicity, and I was a single mom, and it was really hard. He didn’t leave us in a very nice way. I’ve also alluded to the fact that not only is he not nice, but he could possible be cruel, so we’ve kind of built up these ideas and these pictures of who this man could be. I know the producers have mentioned a few times that there are plans and they’re talking about either bringing this character in, or even showing who he is if we’ve already met him on the show. I can tell you that Emily and I are really excited for when that happens because I think that it’s a really interesting part of who both of our character are, and I know that the fans are dying to see who he is as much as we are. I can tell you that it is coming, just not when.

Arrow airs Wednesdays at 8 p.m. ET/PT on the CW