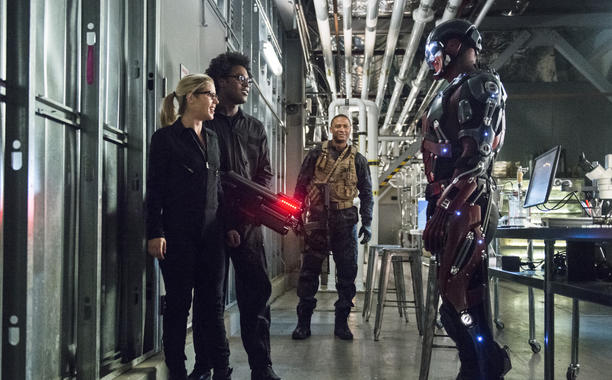 Now that Team Arrow knows that Ray Palmer (Brandon Routh) is alive, they’ll do everything in their power to get him back. Of course, it’s easier said than done since Ray has landed in the web of Damien Darhk (Neal McDonough).

“Ray is fighting for survival, desperately trying to get somebody to pay attention and trying to get Felicity to respond,” Routh tells EW. “Nobody understands and thinks he’s dead. It’s a complete S.O.S., with drastic measures that he’s unleashed — as much as he can do in his current situation. Damien’s motivation is to understand my technology, and then maybe when he finds out a connection, to bait whoever may be coming after me.”

Despite being MIA for more than six months, Ray doesn’t harbor animosity toward Felicity (Emily Bett Rickards) over her failure to find him sooner. “She didn’t even know the experiments that I was doing,” Routh says of Palmer’s miniaturization tests. “It’s safe to say that there’s no reason for anybody to suspect that he might still be alive.”

Still, Felicity’s devastation at knowing Ray has been alive this whole time will be the first obstacle she and Oliver (Stephen Amell) face in their relationship since returning to town. What probably doesn’t make it any easier is the arrival of Mama Smoak (Charlotte Ross). Will the hidden engagement ring also come into play? Executive producer Wendy Mericle stays mum, only noting that Oliver currently has a lot on his plate.

WANT MORE EW? Subscribe now to keep up with the latest in movies, television, and music.

“For Oliver, he’s still dealing with this question of can he live in the light and be a superhero and run for mayor and have a relationship,” she says. “It’s very complicated and it involves a lot of emotional juggling. It’s really the question of whether or not he can be true to his new decision to live in the light. As things escalate and as H.I.V.E. escalates, that attempt to do that is going to be challenged. How long is he going to be able to recommit to this new way of doing things? At what point does it become too much? Does he start backsliding into old habits?”

But the darkness within others is actually what stands in the way of the rescue mission to get Ray back going as planned, especially when the side effects from the Lazarus Pit rear its ugly head. “It’s always going to be a threat to Team Arrow in the sense that if Thea [Willa Holland] doesn’t deal with it and she goes off the rails, there’s always the potential that she might kill somebody,” Mericle says, noting that its compounded for the young hero as she tries to find balance in her life. “She’s dealing with being a superhero and being a vigilante, which is difficult enough when you’re trying to maintain some sense of normalcy in your life, then on top of it she has this bloodlust issue and this drive to kill, the answer to which she doesn’t want to pursue. She doesn’t want to kill people to satiate that.”

It’s much the same for Sara (Caity Lotz), who joins the team on the mission. “She was already down about who she was as a person and now she has this uncontrollable urge to kill,” Lotz says. “Morally for her and on her conscience, it’s just as devastating. She doesn’t want to hurt people. She’s been trying so hard to get away from all that darkness, and here she is thrown back into it, and even more out of control.”

Arrow airs Wednesdays at 8 p.m. ET on The CW.